“Any fear of getting drunk in this pub?” - Nigel Heath

Nigel Heath was born in Crawley on 21st October 1957 and his daughter Georgina was born in June 1987.

His love for Beesands began at a young age with annual trips down to the area with his parents staying at the local caravan site. When the time came that the site was shut down, they had become like locals and made firm friendships down here, in particular with Anne and Pete Steer, who they stayed with every year after that.

After a chance meeting at The Bell Inn pub in Nottingham; Nigel first introduced Rachel to Beesands in 2001 when they came down for a long weekend. After a few more visits and having introduced Rachels’s son Scott to the area and Georgina to them, a conversation struck up in October in the car which would change their lives forever.  Rachel casually mentioned that it would be nice if they lived down there rather than just visiting for holidays, Nigel replied, “if I ever asked you, would you move?” “Try me!” was her response. They moved the following May with Georgina visiting for frequent holidays.

Nigel bought “The Sea Thatch” property which was derelict at the time and the long process began turning it into the beautiful home it is today. Whilst this was ongoing, Nigel became financially involved in The Cricket Inn with the ex-proprietor and eventually fully took over the pub in December 2002. They kept it as it was for a year and then in January 2003 they gutted it from top to bottom and completely transformed it- extending and remodelling the kitchen, moving the bar, renovating all of the upstairs bedrooms as well as replacing all of the furniture.

Nigel, Rachel and Scott lived above the pub for some time before they purchased a property on the village green to live in whilst renovations were still going on at The Sea Thatch and in 2004 they added puppy Brewster to the mix. 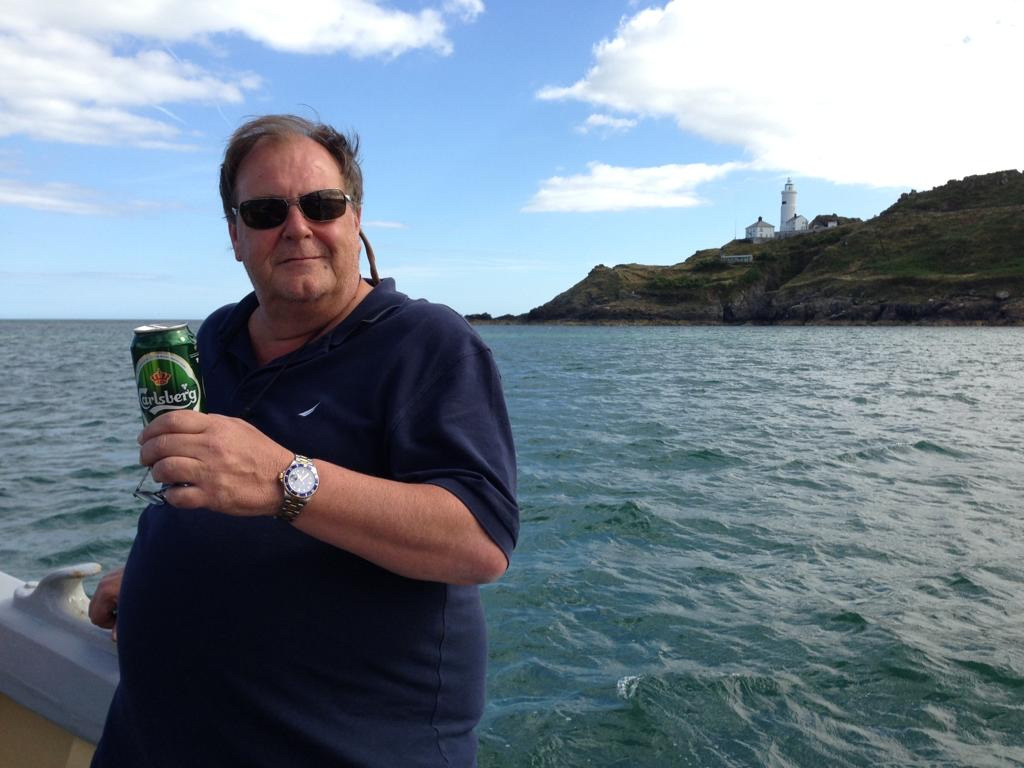 “There isn’t a day goes by that I don’t thank Nigel Heath, my husband, my best friend, for bringing me to such a beautiful part of the world - where we have made so many friends that are like my extended family.”

One day Nigel asked Rachel to choose which house she wanted them to live in and after assuring her that all the renovations would soon be finished at The Sea Thatch, and they would only have to move back in above the pub for “6 months maximum”, they sold the property on the green. 1 year and 3 months later, whilst Nigel was away on his annual boys’ trip, Rachel decided enough was enough moved all their belongings out of the pub and into what is still the family home today.

Upon his return to The Cricket Inn, with suitcase still in hand, she happily informed him that she had taken matters into her own hands, and they no longer lived above the Cricket Inn. If you knew Nigel, you can guess his reaction, but eventually (and a few drinks later) he did actually thank her.

Over the years, the Cricket has survived storms, a bomb in 1942 which destroyed the adjacent cottages and cost the lives of 7 villagers, plus a mudslide that passed through the Inn from back to front. Nigel and Rachel took over the helm in 2001 and since then there have been no catastrophes but many positive changes with a complete refit in 2003.

In 2010, the Cricket Inn’s extension enabled the capacity for an extra 4 letting rooms meaning they now boast 7 beautifully appointed 4AA Gold star bedrooms, 5 with stunning sea views. Coupled with a beautiful new restaurant headed up at the time by son Scott, which changed the old village pub into what we have today.

Puppy Buddy was added to the family in June 2016.

Nigel and Rachel took over our sister pub The Church House Inn in 2018. Nigel had always said to Heavitree brewery that if it became available, he wanted the first refusal. The dream eventually became a reality and they instantly got to work fully renovating the place and turning the upstairs flat into numerous bedrooms, transforming it into the popular bed and breakfast it is today.

Sadly, Nigel never got to see the renovations to The Church House Inn completed, after passing away from a heart attack in March 2019 whilst at home with Rachel. His legacy lives on through Rachel, his son Scott and Scott’s wife Rachael.

To anyone who knew him, Nigel is always described as a larger-than-life character who (once he had had his large morning coffee in his favourite Starbucks mug) was always laughing and making friends wherever he went. He deeply loved his children and idolised his 3 granddaughters - Sienna, Isabella & Olivia-Mae.

Famous Nigel quotes- how many do you recognise?

“If we run out of carling it’s a sackable offence!”
“You can come back and do it all again tomorrow! We open at 11am”
“Calm down, calm down, there’s 3 prizes”
“If it’s too good to be true, it usually is”
“I like your company, but I don’t like your hours”
“What’s for tea?”
“That’s my missus, I can tell by the way it’s ringing”
“Right, I’m ordering a curry, who wants one?”
“I’ll just finish this fag and I’ll catch you up!” said to runners/walkers going by the pub